Embroidery is one of those crafts that I really want to be amazing at. Well, maybe that’s all crafts. I am somehow both lazy and over-ambitious with new projects, so, unfortunately, it remains a craft that I am good at, but not great at. Like knitting. And making pickles…

Anyway. Every month at the library I host an “adult maker” workshop where we bring in local artists and makers to teach a skill or craft. Past workshops have brought in ceramic artists, beekeepers, and printmakers. This month I was the local artist teaching a class on Pittsburgh-themed embroidery, or, “yinz-broidery”. Yes, I thought of that really clever name myself, thank you for asking.

For those of you who are not familiar with the word “yinz” or “yinzer”, a “yinzer” is a term for a native Pittsburgher who speaks with a Pittsburgh accent and uses words such as “yinz”, “n’at”, “nebby”. Ex. “She asked what yinz were up to n’at and I told her to stop being so nebby.” A little bit of a stretch, but you get the idea. It’s frequently a source of pride in Pittsburgh, to be considered a yinzer.

My Yinz-broidery class wasn’t exactly well attended… I had four participants by the time the class was over, but it was a lot of fun and I think the results were pretty cute. The ladies got to take home one or two small embroidery hoops featuring designs that I created specifically for the class. Overall if felt like a success!

I think I’ll keep making these for small gifts for ex-pat Pittsburghers… Once a yinzer always a yinzer, so they say. 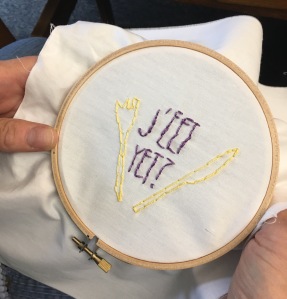 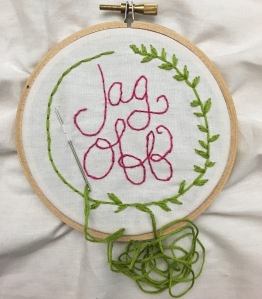 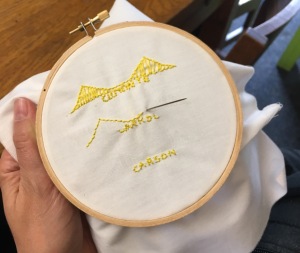